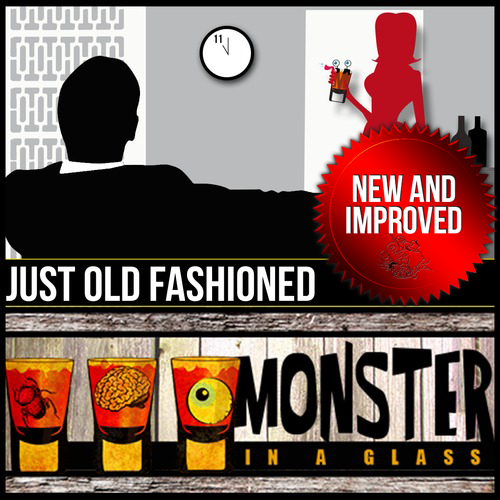 The Old-Fashioned Cocktail is probably one of the most famous cocktails ever, so you are almost not a cocktail bar nowadays if you don’t have some version on your menu. Researching the Old-Fashioned was a daunting idea at first, if for no other reason than being called something as non-descript as old fashioned. We can assume that it is probably referring to something very old, and in this case it turned out to be the true, original cocktail. The first, the prime, the archetype, the Elder cocktail. The one that allows purists to define what is, and what is not a cocktail.

Most commonly made with bourbon or rye, it was originally made with a non-specific liquor, and could have included gin, brandy, or whiskey. It can be argued though that the bitters, sugar, and water really help to characterize this drink as the cocktail, and not the liquor in it. A 200 year old recipe is bound to change and then be standardized at some point, right? While we looked for a point in the evolution when bourbon and rye became the dominant component, and orange peels the norm, it continued to vary throughout its long existence. Even today, what is considered a basic Old-Fashioned doesn’t necessarily match the earliest recipes and changes from bartender to bartender.

Like many of the most famous cocktails, we also thought this would have contested origins, with everyone crawling out of the woodwork wanting the ownership. Aside from someone claiming the first bourbon recipe, there isn’t anyone really stepping forward. Then again, how do you claim something over 100 years old by time you get a hold of it? George Kappeler’s Modern American Drinks (1895) seems to have the earliest recipe in a book with the name Old-Fashioned, but the name appears in newspapers in the preceding decade. The name truly was a product of the 19th century cocktail era, with more bartenders, more creativity, and more cocktails than ever before. Being known as simply “cocktail” prior to that was fine, but as you get into the 1860s you have to call it something specific to differentiate it from all of your other cocktails. It probably wasn’t exciting at the time, it was basic, it was what the old men drank, it was dare I say, old-fashioned.

This episode runs the gamut of old-fashionedness including discussions about infections, milk cocktails, George Washington “treating” for votes, the 1893 World’s Fair, and H.H. Holmes murdering 11,000 visiting bartenders! Note to all the parents letting their kids listen, we say the word cock in this episode a whole lot. Probably more than necessary. We also learn what a fundament is, and the reasons people put ginger in them. Yep, old-fashioned times were pretty gross it turns out. But hey, cocktails!

Monster in a Glass
angostura, bourbon, sugar
Episode 10: Papa’s Poison – The Daiquiri (and its kin)
Episode 12: Moscow Mules – In the Cold