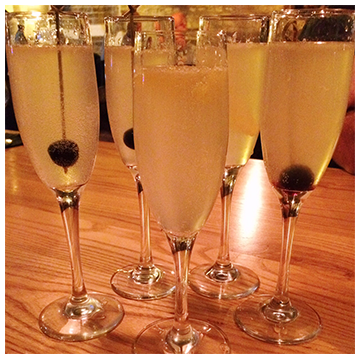 The French 75 episode was the point where I had a couple of realizations in the production of the show.

So Jay and I actually recorded this episode prior to episode #1. I don’t exactly recall why exactly,  but I think we were more prepared with the French 75 content before we were ready with the Manhattan. But what happened in the recording was that the material for the discussion was much heavier than we considered just reading it on paper. In post-production I realized that it was bummer material as I listened, I cut a lot of it, and I wasn’t too excited about creating a depressing show.

I realized that on one level it was purely the pace of the conversation. With the two of us outlining the history at the front of the show, it takes on the character of an interview or a tag team presentation; coupled with the topic of World War I and its meatgrinder aspect…it’s a real goddamn downer.

I came to two conclusions. First of all, I needed to be cognizant of not making the history an emotional endeavor. The material is what it is; a lot of history is nasty business and if you identify with it (as at times we should), it can be extremely heavy to consider. By all accounts I’ve read and heard from other podcasters how much of a horror show World War I was. To consider it too casually seems disrespectful, but I’ve decided our show sits more comfortably at the edge of a party rather than the edge of Hell. It’s a tricky balance, but I think it’s important we manage it.

Second, we needed to turn the show into a conversation instead of a lecture, thereby reducing the presence of the stark silence in the background and naturally picking up the pace of the presentation. I’m committed now, for this production, to always utilize three members of a conversation to increase the perspectives of the information around the table and to energize the stories we tell.

I think this was a critical step in the evolution of the production and you will see in further episodes the difference between episodes that followed this one and episodes that preceded it.