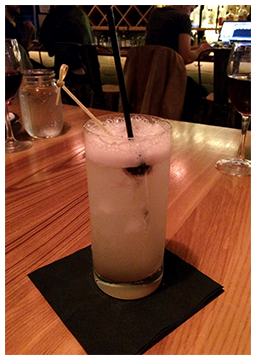 First of all, I am deeply sorry for the state of this episode. This was the 3rd episode I ever recorded back in 2013. In 2015, we came back to this episode to re-record it in the new format. At some point we had decided that the stark silence in the first part of the show was really distracting. We thought low music in the background might offset that and so we started producing the show with background music in the first part. We convinced ourselves it was OK, despite actually feeling it was alien and possibly more distracting.

At the time we had no other solution, but after Episode 2 French 75 I decided we needed a third participant making it more of a conversation, and when Mick joined us I found that the background silence melted away because the conversation was engaging or entertaining enough. We didn’t realize that though. We continued producing the shows with the background music until a few episodes later we compared both versions with and without and decided it was much better without the music. At that point I went back and stripped all of the recordings of the background music – even the ones without Mick – but in all of the hubbub somehow a few of the files got lost or deleted. So this one and Episode 4 Sidecar still have the background music and I’m fine with that as it reminds me of an older, stupider time.

Another aspect of this episode that I want to point out is the nature of the drink itself. It is so basic it forms the starting point for many other cocktails. In its heyday there were many other Collins drinks that were essentially mixing a main spirit with soda and lemon — whiskey Collins, brandy Collins, rum Collins — the thing is, many of these drinks already have other names because it’s an easy shift to make. A similar thing is happening now with the Moscow Mule and Mules, a Kentucky Mule or a Scottish Mule are already drinks and they already have names.

We’ve discovered other cocktail recipes serve as the backbone to other drinks because the mix works. Both the Manhattan and the Martini are the base for multiple other drinks. Slightly alter the recipe or add a new ingredient and you have a new drink and you will see this time and time again as we continue discussing new cocktails on our show.